Who is this Mother?  She is my mother.  She is the mother of my sisters and my brother.

No-one ever told her story not even me.

I’m going to name my mother. She deserves to be named. She deserves for folks to know who she was, how she lived and how she died. My mother’s name is Mary Agnes Soorley. She was born Mary Agnes Hill in Brisbane on November 21 1926 and she died in a car accident on 20 June 1980 at 53 years, six weeks before my first child David was born.

Mary’s mother was Agnes Wilson and her father Sam Hill.  Yes Sam Hill… Agnes was born to Scottish parents and Sam to Irish parents who emigrated to Australia when they were young. How they met I don’t know. I do know that Sam was a butcher and Agnes clearly a mother and homemaker. Mary had 7 living siblings and one who died when Agnes died in childbirth when she was two years of age. This is a family whose life was dogged by tragedy and pain, however this is not a gloomy story, not at all, well not entirely. Descendants of the Hill family live all over Queensland and Australia and we are all a testament to the strength and resilience of those Hill children.

There was Lily was the oldest, then Sam, Margaret (Madge), Mona, Danny, Elizabeth (Betty), John and Mary. I don’t know if the baby who died was a girl or a boy. Some of these children lived tragic and sometimes short lives and some were luckier. The tale of these children’s lives is a tale for another day. I can only tell you what I know about Mary and a lot of that is second hand and possibly unreliable. I was 26 when my mother died. We were close, very close. Even so she really didn’t share much of the nitty gritty of her early life. I picked up stuff from my Aunty Betty and Uncle John, from my eldest cousin Ronnie, son of Mona, and my cousin Warren, son of John, who researched the Hill family tree.

Betty, John and Mary were brought up by Granny Wilson after their mother died. Some of the older children lived with Sam and some possibly with other members of the Wilson family. They all lived in Red Hill a suburb of Brisbane but those three little kiddies very rarely ever saw their father, except when they went to the butcher shop to get meat. Granny Wilson was illiterate, old, possibly sick and appears to have had a hatred of Sam Hill. Not the best person to be bringing up 3 small children but foster care or an orphanage was probably the only alternative. Betty told me the story of  one Christmas they went to the butcher shop where Sam worked for bones for soup and he gave them extra meat. When they got home Granny Wilson made them take the extras back to Sam.

Mary told me two stories in particular that made me realise what a sad life she had as a child Granny Wilson was a very religious Baptist and Mary told me about the shame and embarrassment she felt when she had to go with the group to sing and play the tambourine on the street in Brisbane city and she would see her school friends laughing at her.  One day when Mary was about 13 years Granny Wilson was about to hit Mary and Mary raised her hand to her and hit back. Mary was made a ward of court and went into foster care for some time after that. These tales help me to understand how strong my mother to become such a gutsy resilient person after such childhood disadvantage. Eventually when she was older she, Betty and John went to live with Sam and her brothers and sisters.

In 1952 Mary married Austin Joseph Soorley from Tweed Heads. Austin was the youngest of 13 children so we had lots and lots of cousins on both sides of our family. Mary and Austin had 4 children in six years John, Anne,(me) Ruth and Kate. Then as Austin used to say “they discovered what was causing it”  Austin was a teacher and they moved around NSW as he furthered his career.

What do I remember about Mary?  She was smart, funny, loving, feisty, compassionate, a real looker and a little bit crass. Not sure if the crassness came from the Hill family or from Austin. He pretty much had a doctorate in crassness. Mary was uneducated. Due to her impoverished family circumstances she left school at 14 and became an office worker. She read voraciously and widely and she was the first radical socialist I ever knew, but I really didn’t realise that until after she died. I heard Gough Whitlam was sacked in 1975 when I was driving home from Prac Teaching. I rang Mary as soon as I got home full of rage and a terrible feeling of disbelief and powerlessness. Mary answered the phone singing “We’ll keep the Red Flag Flying”. Oh how I loved her that day. 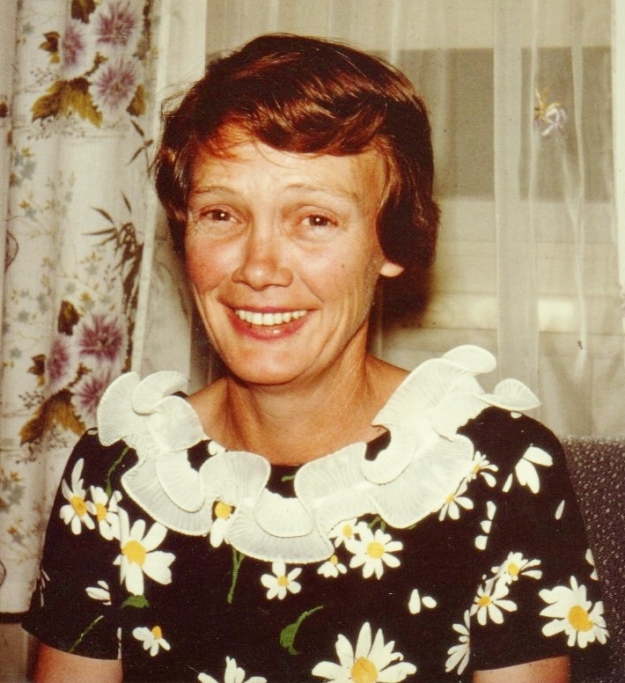 Before she married Austin she had a whole life that I don’t know much about. It seemed like it was quite joyful but troubled. There is a picture of two beautiful, stylishly dressed women striding down the street in Brisbane seemingly full of confidence Mary and Betty. I know she was involved with a married man and moved from Brisbane to Melbourne to make a new life. I know she later met my father at the Tweed Heads Golf Club and they quickly became involved and soon married. Austin was a teacher and she supported him and followed him with his teaching career from Berowra Waters, Tabulam Aboriginal station (for 9 years and 4 children, no electricity) Pottsville Beach, Baradine, Guyra and Taree. Mary never worked, not because she didn’t want to, but jobs weren’t plentiful in those small towns and Austin’s philosophical view was that it was better that those scarce jobs go to young people in the community. I’m not going to make any comment about that at all!

I remember about 1977 Mum stayed with me in Sydney. My husband Stephen was in the RAN and was away at sea and Austin was on a golf trip to New Zealand. I was teaching at a school in my neighbourhood and on Friday afternoons we, mainly women as after all we were all in the humanities, would go to the Millers Manly Vale Hotel and pretty much get a skinful. This night about 8 women including Mary left the pub and went to dinner at a Chinese Restaurant up the road. We were loud, talkative, knew everything and wanted to share it with everyone especially about feminism and women’s rights. I remember Mary saying later that weekend how envious she was that I has such good women friends and that I had so much intellectual stimulation. About then I introduced her to Marilyn French’s book “The Woman’s Room” She alternated between, recognition, acceptance, anger, rebellion and a myriad other emotions. That was when she finally decided she was going to apply to go to university. She was 52 years

A couple of strange things happened just a month before Mary’s death which despite my extremely pragmatic approach to life made me think that she had some inkling of her death. Mary had to become a Catholic to marry Austin in the church but she seemed to have maintained little interest in Catholicism and neither did Austin when the Catholic Church’s attitude to birth control became a serious issue for them. Mary articulated that she did not believe in a God and declared herself an atheist. In May 1980 we were all together to celebrate our youngest sister Kate’s 21st birthday at home at Taree. It was a pretty wild old show with lots of Kate’s hungry and thirsty university friends. There was also a fair bit of celebration on all the family’s behalf as well.

At a quiet family recovery the next day Mary asked me if I would have my baby baptised. I replied it was not my wish but would do so if my husband Stephen felt strongly about it.  Amazingly enough she seemed shocked and said that I must….. “ You must. You have to have a foot in both camps”.  At the time it seemed a very strange thing for her to say, particularly as she knew I shared her non-existent religious beliefs. Later that weekend she also stated to us all that when she died as the oldest girl I was to have her engagement ring. I was a little discomfited by her statement then and now. A month later she was dead.

When she died in 1980 she was in her 2nd year at the University of New England (UNE). Kate was still at UNE but they never saw each other as Mary was studying externally and only went to the Uni in the holidays when Kate wasn’t there. In her first year she studied English and Ancient History and got a Credit and Pass. Great for a 52 year old woman with no formal education at all . She was amazed and so happy at her success. In the next year Mary studied Politics. She was amazed she had the same lecturer as I did years begore and how he still strode down the stairs into the lecture theatre with his gown flowing out behind him. If I remember correctly it was Colin Tatz, a great academic and historian.

Half way through that year she was killed by a careless and almost certainly corrupt driver.

Mary’s death was a tragedy in so many ways. My father Austin and my siblings John, Ruth and Kate struggled for years to come to terms with it and still do. Mary and Austin were on their way from Taree to visit Ruth and me in Sydney when only 20 ks from home a car crossed onto the wrong side of the road and hit their car head on. Austin had chest and facial injuries. Mary had no visible injuries but died 2 hours later from both lungs collapsing. My brother John was only a few kilometres away in Tuncurry but he wasn’t informed until Mary had died. She died alone.

Austin spent a heap of money and strength through two inquests but Mary’s life went unavenged by the legal system. I say legal rather than justice as her death was the perfect example that justice is not necessarily achieved through the legal system. To this day over 36 years later I still feel angry that while she struggled to overcome extreme adversity in her early life and she managed to live a good, purposeful and giving life she was betrayed in death. The question I ask myself on a regular basis is how does someone cross onto the wrong side of the road, crash into another car, kill a women and badly injure her husband and not even get a Negligent Driving charge, let alone, Manslaughter, Dangerous Driving …. or anything. There were other tragic examples of police corruption in Taree at that time that came to light much later involving the Police Officer who was the policeman at the scene of the accident and the investigating officer into Mary’s death.

Austin took many months to find the perfect inscription for Mary’s headstone. She loved poetry and especially loved William Blake.
Mary Soorley
Killed 20 June 1980
To see a World in a Grain of Sand
And a Heaven in a Wild Flower
Hold Infinity in the palm of your hand
And Eternity in an Hour

My mother Mary Soorley nee Mary Hill was a strong, amazing woman. She is an inspiration. I believe she is the reason John, Ruth, Kate and I, despite distance and difference, have always managed to maintain a close relationship. We owed it to our mother. 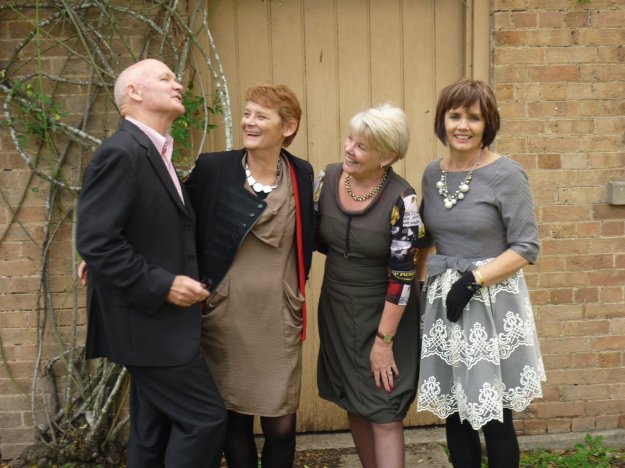 I wanted to share her story. Better late than never